It is true that donkeys have a reputation for stubbornness due to their highly developed sense of self preservation. However, do not be fooled by some of the Western stereotypes concerning these incredible creatures. They are a dynamic shadow picture used throughout scripture, they can even help teach us what attributes the Father is looking for regarding a true servant. They can also provide us with deeper insights regarding the Fathers entire plan of salvation and restoration for the House of Israel, if we have eyes to see and ears to hear.

So is it an honor to be called a ‘donkey’ while serving in our current fallen state? You better believe it!

Here are some of the reasons why…

“But Elohim’s anger was kindled because he went, and the messenger of Yah took his stand in the way as his adversary. Now he was riding on the donkey, and his two servants were with him. And the donkey saw the messenger of Yah standing in the road, with a drawn sword in his hand. And the donkey turned aside out of the road and went into the field. And Balaam struck the donkey, to turn her into the road. Then the messenger of Yah stood in a narrow path between the vineyards, with a wall on either side. And when the donkey saw the messenger of Yah, she pushed against the wall and pressed Balaam’s foot against the wall. So he struck her again. Then the messenger of Yah went ahead and stood in a narrow place, where there was no way to turn either to the right or to the left.When the donkey saw the messenger of Yah, she lay down under Balaam. And Balaam’s anger was kindled, and he struck the donkey with his staff. Then Yah opened the mouth of the donkey, and she said to Balaam, “What have I done to you, that you have struck me these three times?”And Balaam said to the donkey, “Because you have made a fool of me. I wish I had a sword in my hand, for then I would kill you.”And the donkey said to Balaam, “Am I not your donkey, on which you have ridden all your life long to this day? Is it my habit to treat you this way?” And he said, “No.”Then Yah opened the eyes of Balaam, and he saw the angel of Yah standing in the way, with his drawn sword in his hand. And he bowed down and fell on his face.And the angel of  Yah said to him, “Why have you struck your donkey these three times? Behold, I have come out to oppose you because your way is perverse before me.” The donkey saw me and turned aside before me these three times. If she had not turned aside from me, surely just now I would have killed you and let her live.” 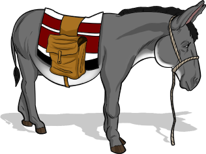